Is Odyssey Expedition The Right Cruise Ship For You?

Why choose the Kimberley, which boat, & more.

Back to Odyssey Expedition 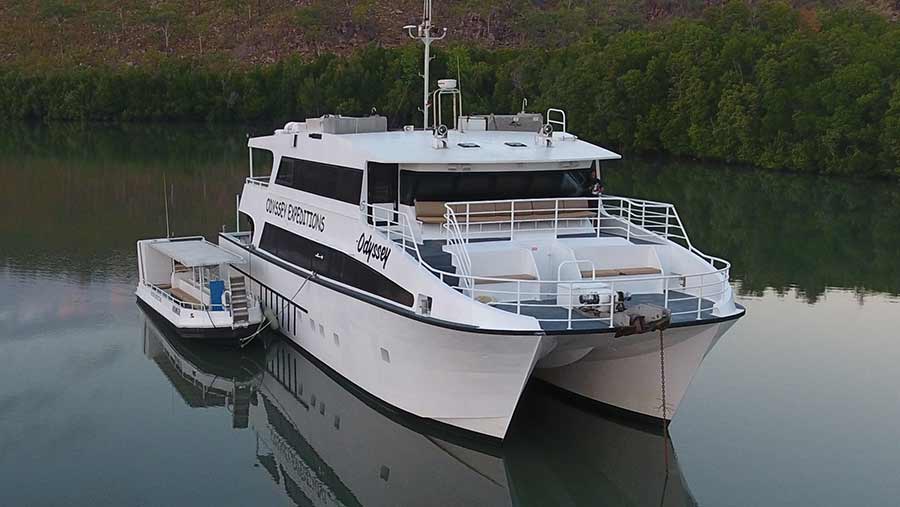 
Our crew are looking forward to meeting you. Your charter bus will pick you up at around 9am & transport you to Gantheaume Point where our tender vessel, “Homer” will transfer you out to the Odyssey, the first of many trips in the tender. After a safety briefing, an introduction and a light brunch you can settle into your new home for the next 9 days.
You may wish to stroll around the decks, enjoy the fresh sea air or just sit back and relax while observing the amazing colours of our northern coastal beaches drift by as we start our journey north. 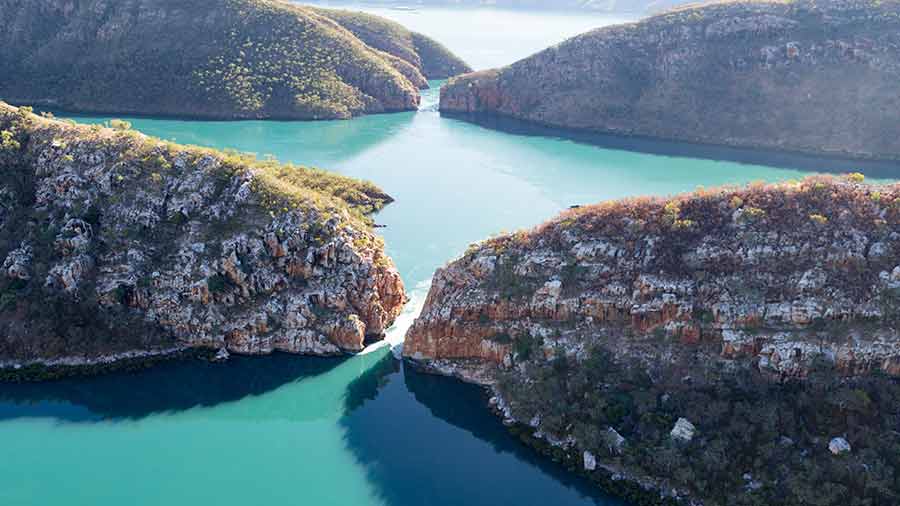 
Relax, sit back and enjoy a satisfying breakfast & take in the scenery as we cruise through the magnificent Buccaneer Archipelago, consisting of more than 800 islands & with a tidal range of over 10m, Named by Philip Parker King in 1820 in memory of William Dampier, a supposed Buccaneer for the king of the time. We will go ashore for a leisurely walk on the pure white sands of Silica Beach then head to Crocodile Creek where we’ll have a swim in a fresh water hole at the base of a waterfall. We will then cruise through to Talbot Bay the location of the magnificent Horizontal Falls, there we’ll experience the awesome power of the falls then spend some time exploring the spectacular geology and scenery of the waterways of Cyclone Creek. Tonight we’ll anchor in a protected bay to watch the Kimberley sun settle over ocean. 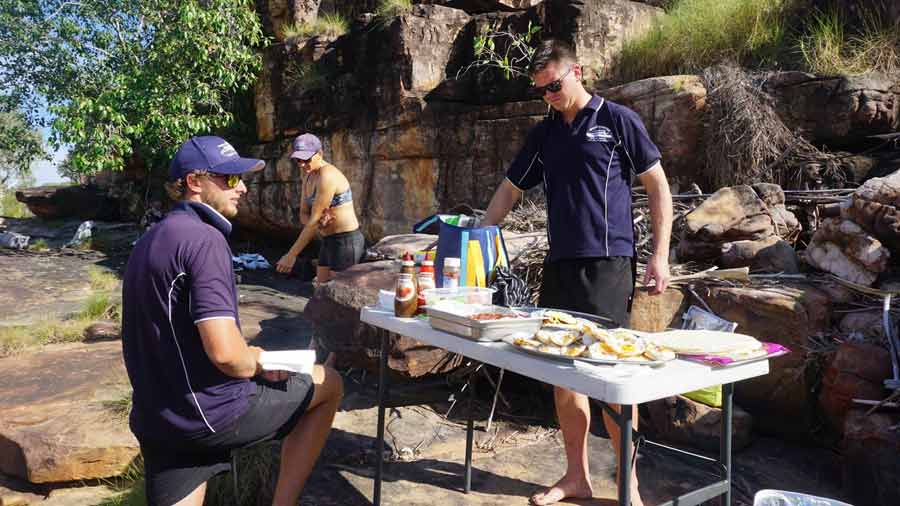 
After a scrumptious Brekkie this morning it’s into “Homer” and a leisurely cruise up Red Cone Creek for a refreshing swim in the water hole provided by the beautiful Ruby Falls, feel the power of the falls as you bathe beneath them. Back to Odyssey and a short cruise to Raft Point, the site of perhaps the best Aboriginal rock art on the coast. A short walk reveals spectacular scenery & endless views across Doubtful Bay to Steep Island. At the Raft Point gallery we will learn about the local Aboriginal beliefs & cultures, the lifestyles they once enjoyed & the Wandjina that shaped their land. 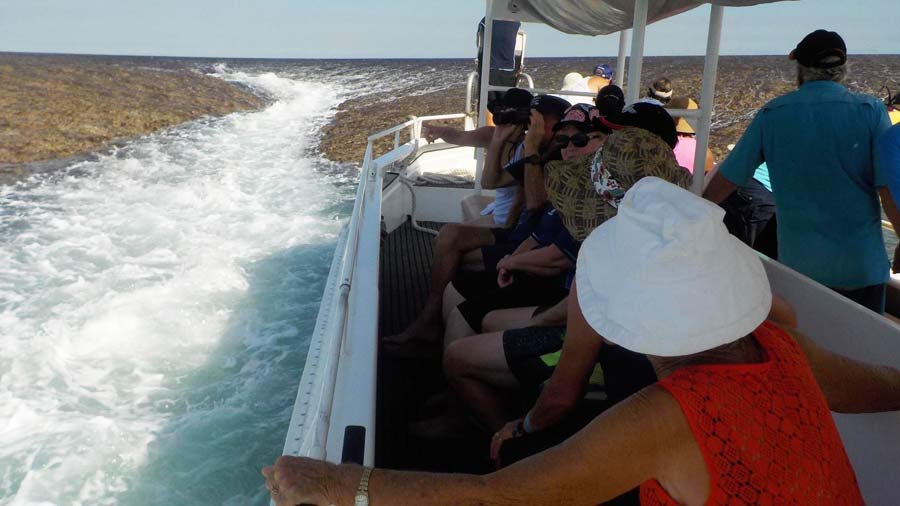 
From Raft Point we take an unforgettable passage through Turtle Alley to one of the Kimberley’s most spectacular sights’, Montgomery Reef, 400 square kilometres of reef that on a high spring tide is 4 metres underwater. With the outgoing tide the reef is then exposed by more than 4 metres; a marvel not to be missed. Spot for Giant Turtles, Manta Rays, Dugongs & the many varieties of fish species that inhabit these waters. Then we will cruise across the bay to the beautiful Sale River, “Homer” will take us up stream for a closer look at the stunning orange and red sandstone cliff’s as we wind our way through the narrow gorges toward the Sale River Rainforest. We will take a leisurely walk in the lush rainforest environment and enjoy the crystal waters of the creeks that feed the Sale River. Then it’s time to relax on board Odyssey as we overnight at Hall Point. 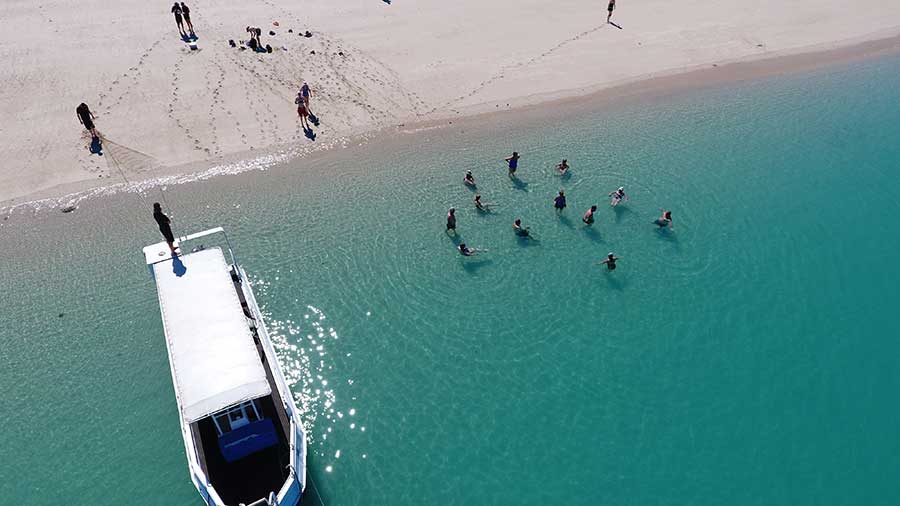 
Today we travel past the Bonaparte Archipelago through Camden Sound. This region has worldwide recognition as a crucial breeding and calving area for the Humpback Whale and hosts the world largest Humpback Whale population. Camden sound is rich other aquatic mammals such as Bottle and Snub-fin dolphins, Blue Whales, Pygmy Killer Whales and Pilot Whales. This area is surrounded by fringing reefs with thousands of fish and marine invertebrates living amongst the hard and soft corals in the warm tropical waters of this truly unique environment. Before Lunch we will go ashore a stroll along the beautiful Hanover Beach, look at ancient aboriginal art then back to Odyssey for lunch and some afternoon fishing. 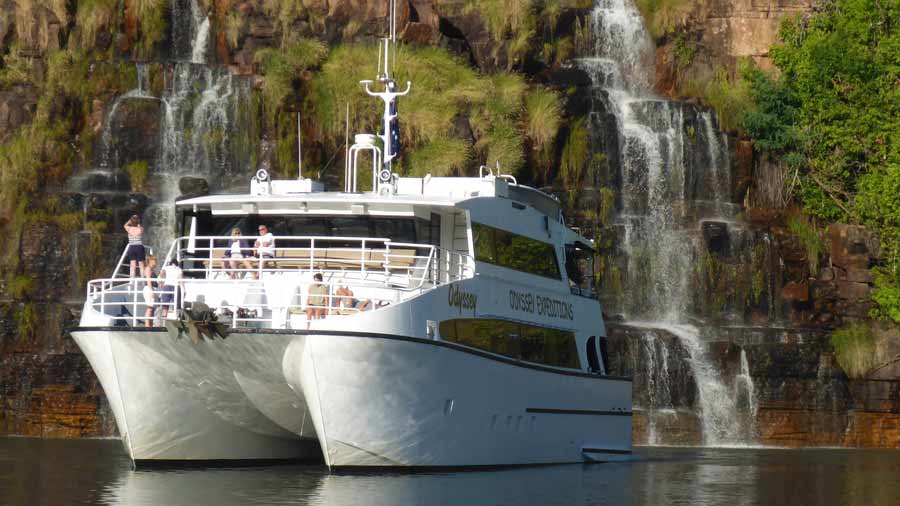 
Today we cruise into the St George Basin, the Kimberley’s largest inland sea. Standing tall on our arrival will be Mt. Trafalgar & Mt. Wellington, named by Philip Parker King in 1820. We will cruise up the magnificent Prince Regent River and take you to, Probably the Kimberley’s most famous icon, the magnificent King Cascades. You will marvel at the sight of cascading water over the terraced rock that has formed over thousands of years, time to put your bathers on you’re going to get wet. Further on up the Regent, if tide allows we’ll visit the spectacular Cathedral Falls. Then it’s ashore for a short climb to view the ancient aboriginal artwork know as Bradshaw Art, named after pastoralist Joseph Bradshaw who was the first European to discover it in 1891. 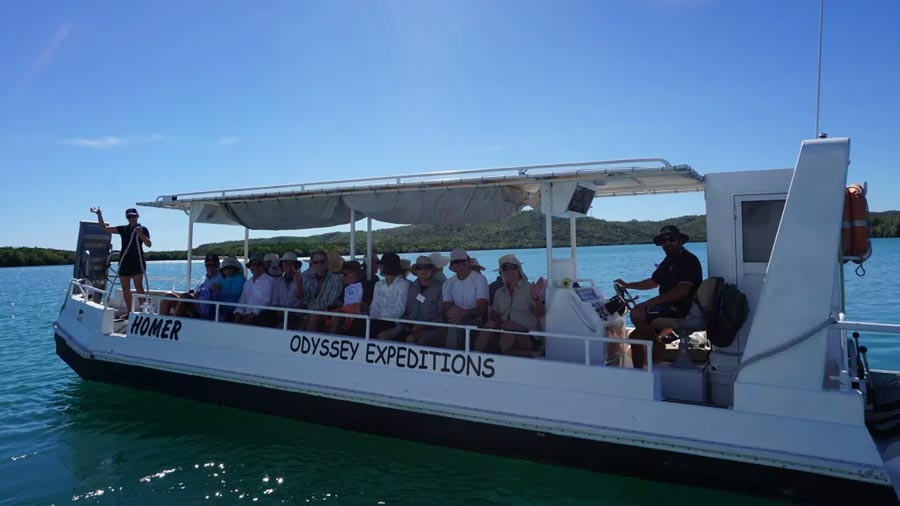 
Still within the Prince Regent, “Homer” will take you ashore where a short walks takes you to the waters of Camp Creek. Enjoy the scenic surrounds and immerse yourself in the refreshing water as we spend some time here at this idyllic location. For the more agile in the group a 20 minute walk to the upper reaches will find two stunning waterfalls, the scene is breathtaking. The upper fall feeds a giant fresh water pool, ideal for swimming, then flows through and over rock to form another pristine pool of fresh water below. After a swim it’s back down river to rejoin the rest of the group for a snack. After spending some time at Camp Creek it’s back to Odyssey to take the falling tide out of the Regent and St George Basin heading towards Careening Bay. 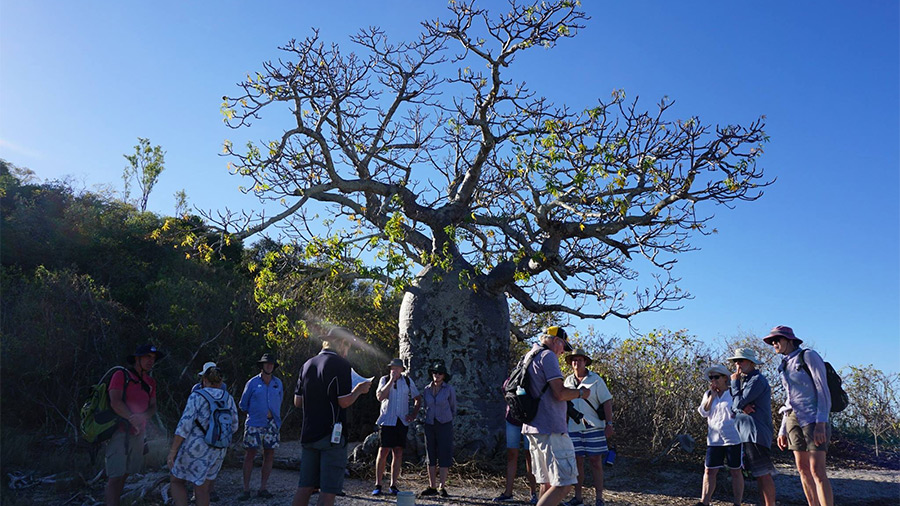 
Awake in beautiful Careening Bay, In 1820 the HMC Mermaid was careened on this beach to repair her hull. Whilst the vessel’s naturalist was recording & drawing many new & unusual Kimberley species of flora & fauna the vessel’s Carpenter took the opportunity to record their time in this area by engraving a large Boab tree with the letters ‘HMC Mermaid 1820’. We’ll go ashore & spend some time reliving history. From the Prince Regent River we cruise towards Prince Frederick Harbour, which is fed by many rivers and creeks including the spectacular Roe & Hunter Rivers. Making the most of the tides we will also be able to visit Porosus Creek. 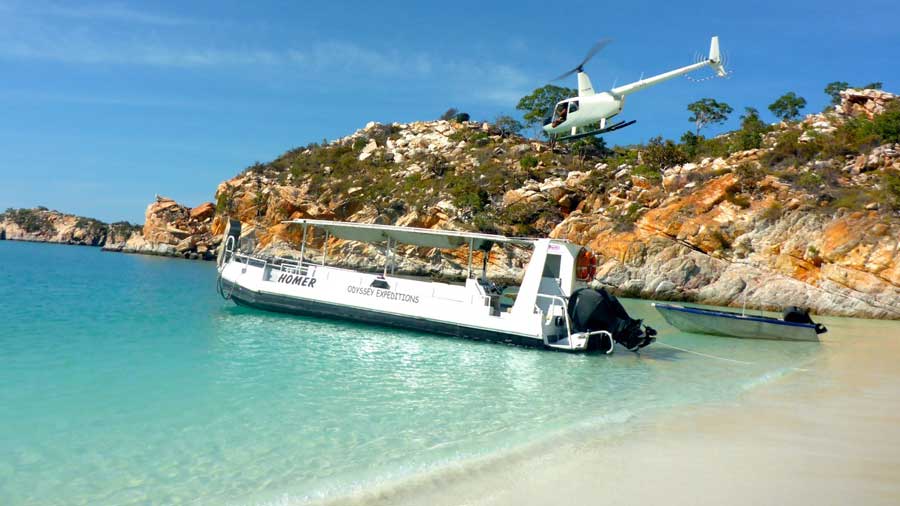 
This day has come all too soon, but the adventure is not over yet, you still have an action packed day ahead. Today we are within the Prince Frederick Harbour & the Hunter River. The Hunter presents perhaps the most spectacular river scenery in Western Australia, with grand red cliffs towering above mangrove fringed rivers. After an early breakfast Our expert guides will show you hidden wonders of this areas wildlife focusing on the bird life and crocodiles, you may spot an elusive Chestnut Rail on the mud banks, Giant Egrets or the huge Great Billed Heron within the tops of the mangroves or the ever present Saltwater Croc lurking below. Then it’s off on your last trip in “Homer” to explore the beaches of Naturalist Island where we will meet your helicopter. After the farewells on the beach you are off on a thrilling scenic helicopter flight where you can see the breathtaking Mitchell Falls. Your pilot will then take you to the Mitchell Plateau airstrip where your aircraft awaits you. A light aircraft will take you southward along the coastline back to Broome. On your arrival back into Broome you will be transferred back to your accommodation.

* All itineraries are indicative only. No two Kimberley cruises will be the same. Each cruise is tailored around the astounding 10+ metre tidal range, weather and sea conditions.

Back to Odyssey Expedition