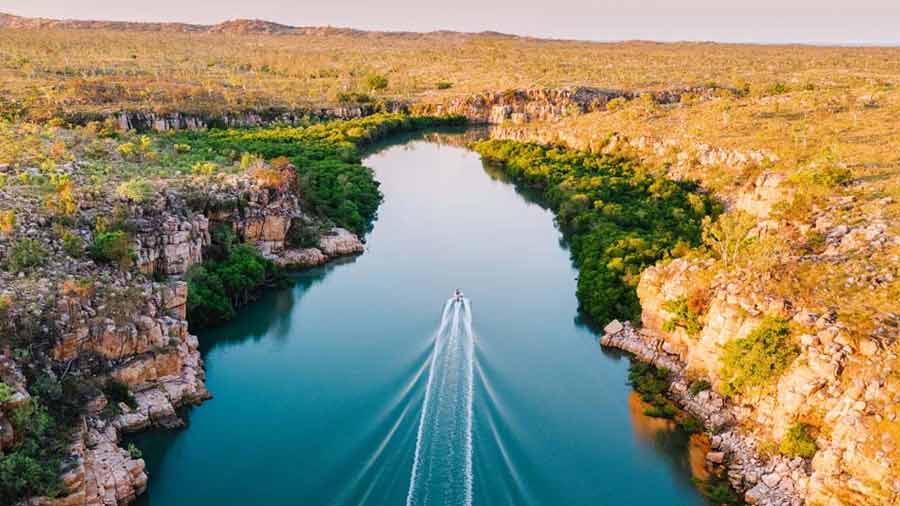 Stretching approximately 630,000 hectares, the Prince Regent National Park, the 99th in WA, is one of Australia’s most important conservation sites. The National Park status protects areas designated as being of outstanding scenic grandeur. At the Prince Regent reserve, this is certainly the case as visitors witness the landscape shift from the rainforest, mountain ranges, cliffs and gorges to barren sandstone flats.

The Prince Regent National Park is under the traditional custodianship of the Uunguu people. Within the park, you will also find examples of Aboriginal rock art as well as other sites of cultural significance.

The reserve, known as a biodiversity frontier, is estimated to home at least half of all the bird and animal species from the Kimberley region. And yes, that includes the saltwater crocodile. In terms of flora, the park is thought to contain over 500 species of plants – something of a botanist’s paradise.

The Prince Regent River, which flows through the park in a near-perfect straight line, runs for 106km. Careering along a fault line in an NW direction from the Caroline Range, the river swiftly courses past anything in its way which includes near horizontal 50m cliffs and a waterfall. All this before it discharges into the Saint George Basin and Hanover Bay.

Mount Trafalgar, named after Nelson’s naval victory of 1805, and its smaller neighbour Mount Waterloo loom over the river. It’s such a long and treacherous trip to the top that the only way to get there is by helicopter.
When in the park, you will also find the Mermaid Tree. The Australian Boab, unique to the Kimberley, is recognisable by its swollen trunk and leafless branches. The crowd appeal of this particular boab is that back in 1820 the crew of the HMC Mermaid breached on the nearby Careening Bay to repair a leak, inscribed their names onto the trunk and, over the years, the letters have grown.

On tour, you’ll get to experience the spectacle that is Kings Cascades. Named after Australian rear admiral Phillip Parker King (Lieutenant of the Mermaid), visitors will gawp in wonder as water tumbles over a staircase of ledges into the crystal pool below. Framed by ferns and mangroves on each side, the cascade descends approximately 80m and is as wide as a football field.

As inviting as the pool looks from your boat, do not be tempted to jump in. Saltwater crocodiles also like it here, and anyone sharing the pool with them is in great danger. In fact, back in 1987, a swimmer was killed by a Salty in this spot. Be ‘Crocwise’.

No roads lead to the Prince Regent National Park, which means to get there you need to take either a chartered helicopter flight or a tender from an expedition cruise. Whichever way you choose, you’ll not be disappointed.

Contact your travel representative to find out how you can venture to the Prince Regent National Park.