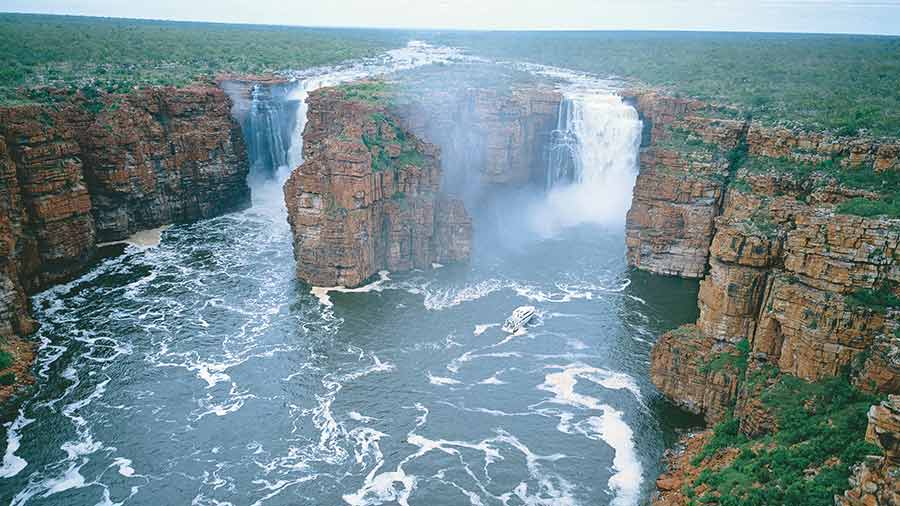 As far as natural wonders go, the King George River and Falls does not disappoint. The remoteness and isolation of these culturally significant sites only add to their appeal, leading would-be adventurers and waterfall chasers to take to cruise boats or helicopters.

The perennial river, named by Charles Conigrave in 1911 in honour of King George V, flows in a northerly direction through the Drysdale River National Park past Seppelt Range some 112km. It travels 12km from the mouth before it navigates King George Falls and plunges 80m (or more) into the water before continuing its journey to Koolama Bay.

As you would expect, the falls draw gasps of wonder from the observers on the deck of a liner or peering out of a helicopter’s window. Not only are they the highest twin falls in Western Australia but at full force (between Dec-May) the thunderous power of the water forcing its way over the sandstone cliffs is nothing short of explosive. It’s no wonder that the local Balanggarra people, of whom the falls have great cultural significance, relate to them as male and female rainbow serpents.

Some cruise ships get close enough to the falls to allow passengers a ‘Kimberley-style’ shower. If you don’t fancy a rinse, you can step back and just stare in wonder at its beauty. So captivating and all-encompassing are they that the cascades are a film director’s ‘falls of choice’. Most recently, King George Falls featured in Baz Luhrmann’s epic tale Australia, starring Nicole Kidman and Hugh Jackman.

When the falls are more sedate, and the serpents are taking a well-needed rest (the month of September), it is possible to climb to the top of the cliffs to take in the full view of the dual falls and the untamed landscape surrounding it. Don’t forget your hiking boots, camera and your head for heights!

The river and falls are located in the North Kimberley Marine Park. To get to the King George River and Falls, you have two choices. The first is to visit as part of a cruise ship’s itinerary. The viewing point from on-deck is a real winner. The boat will cross over the sandbar to allow it to cruise alongside the falls. When you have dried off and finished taking