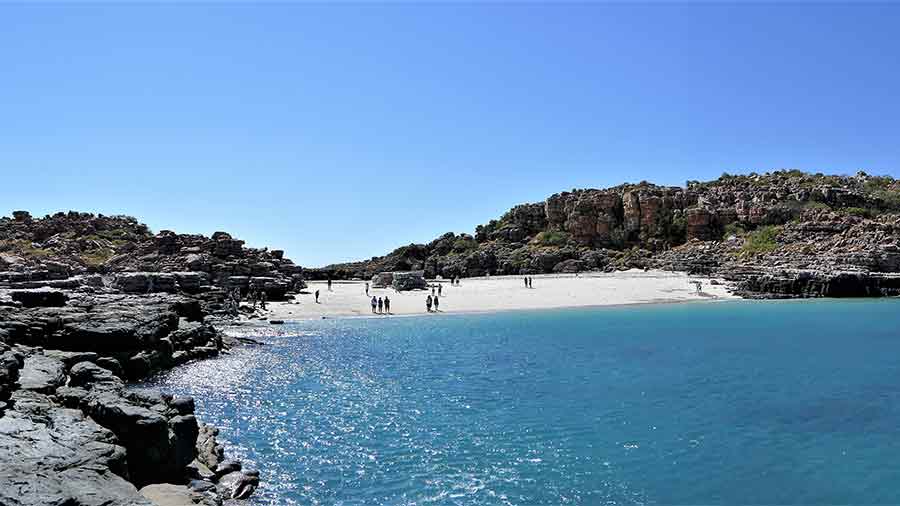 It’s a coincidence that despite being named after a commissioner of NSW, Bigge Island lives up to its name. It is 178km² and the second largest island in the Bonaparte Archipelago (formed of hundreds of islands and islets).

‘Wuyurru’ to the Uunguu people, the island is surrounded by very shallow reefs which makes it hazardous for cruise ships to anchor. Instead, ships Zodiac their passengers to shore, all of whom are eager to see the abundance of Aboriginal rock art, wildlife and caves.

Wary Bay is a valuable source of Gwion Gwion and Wandjina artwork which is found on cliffs and cave walls. At times you will have to crouch low to see the artwork as it is tucked-up inside crevices.
The landscape of Bigge Island is typical of outback Australia. Rugged rocks, weathered sandstone, volcanic rock and quartz all mix into varying degrees of red. Fortunately, this landscape coupled with the fact that there are no predators makes Wuyurru the home of many rare mammals, including the Monjon (rock wallaby), Northern Quoll and the Ilangnalya (scaly-tailed possum). Wildlife lovers will enjoy trying to spot these shy Aussie icons.

Many itineraries marry a trip to Bigge Island with Careening Bay, named after historical events back in 1820. It was at this time that Lieutenant Phillip Parker King, on his third trip charting the coast of Western Australia, got into trouble. His cutter The Mermaid began taking on water and drastic action was required. Waiting for the right tidal conditions, Parker King landed her on the beach. Hence the name.

Fortunately for Parker King there were those less fortunate before him. The crew salvaged metal from nearby shipwrecks, melted it down and were able to make repairs. During the ten days that it took to complete the maintenance, the ship’s carpenter visited the local Boab tree and carved ‘HMC Mermaid 1820’ into the trunk. Nearly 200-years later, the lettering has grown to 12m high and is a big tourist attraction. The Boab, a distinctive tree with a fat trunk and few leaves, was evidently as much a pull to visitors in days-gone-by as there is also an old Makassan Islamic prayer alcove at the rear of the tree.